Welcome to the first post detailing how Herbie tackles a jazz standard. More specifically, this post shows Herbie playing over a tune that has lyrics.

"That Old Black Magic," or T.O.B.M. for short, is a jazz standard composed by Harold Arlen with lyrics by Johnny Mercer. These two men contributed many other tunes to the American songbook both as a team and with other composers/lyricists.

T.O.B.M. appears as the fourth of five tracks on an album called Trio '81. The album includes another jazz standard, "Stablemates," as well as three originals by each group member. The regular Ron Carter and Tony Williams unit accompany Herbie on bass and drums. Similar toTrio '77, this album was recorded in Japan and only released there. For those keeping score of the Hancock discography, Trio '81 comes after the well-known Headhunters, after the VSOP dates, and only about a year and a half before "Rockit."

Here is a link to the track on youtube.

This may have been a mistake. Or, in this writer's opinion, Herbie chose to alter the harmony and form while paraphrasing the melody. With fewer of the original tune's subtleties, Herbie allows for more freedom as an improviser. (See John Coltrane's "Out of this World" from Coltrane for another example of adjusting an Arlen/Mercer tune.)

When choosing a jazz standard to perform as a trio, pianists arguably lean on repertoire with more active melodies. Arguably, most pianist find standards where the melody either repeats a lot of the same note in a row or where the melody includes many longer/held out notes a challenge. Arlen wrote T.O.B.M. with many repeated notes, especially in the A sections. In Herbie's version, he leaves out many notes from the original melody, particularly in the A sections. His arrangement targets certain melodic landmarks while making his way through the form. A listener could not match up all of Herbie's melody notes and the syllables of the lyrics. Herbie decidedly paraphrases more than presents the melody of T.O.B.M.

Herbie achieves this paraphrasing mostly through a rhythmic motif. Over two measures, he plays a dotted quarter note starting on the third beat of the first measure followed by an eighth note. Herbie fills the second measure with silence and then two measure motif repeats. Herbie adjusts the top note of each of these chords to fit melodic landmarks of the tune. Ron Carter plays this rhythmic motif with Herbie. This motif lasts for the first eight measures of each A section. The remainder of the A sections and the entire B section consist of walking quarter notes from Ron and Herbie playing mostly single note variations of the melody.

Here is a chart of Herbie's arrangement of T.O.B.M. 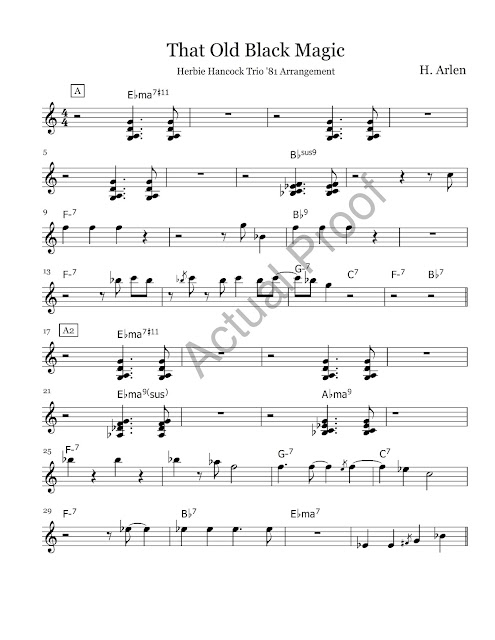 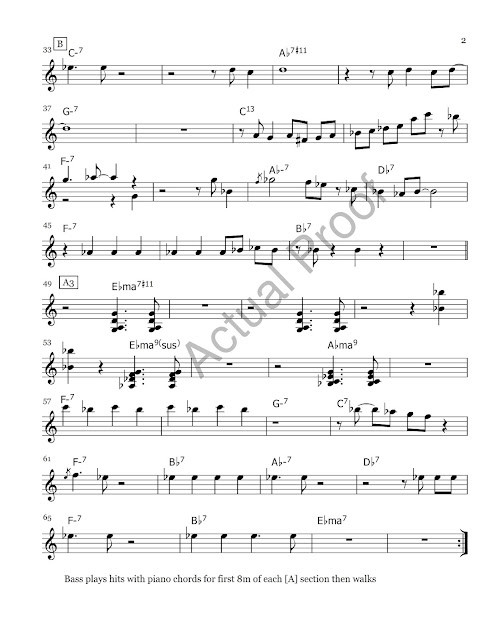 Now onto Herbie's solo. He takes four choruses, allows the tune to breath while Ron and Tony play one chorus together, plays the out head, and last continues improvising over a vamp while the group tags the ending.

Herbie plays mostly eighth-note based lines. He frequently uses bebop language in his lines to imply a ii V that lies one half step higher than the next harmony. Herbie's first chorus contains two examples.

Here, Herbie is probably thinking F#-9 | B7 and then targets an F-9 in the following measure.

Similarly,  in the above example Herbie is probably thinking E-7 A7 as he targets an Abma7 in the following measure. These two phrases, as well as other instances of this technique, create tension throughout the solo.

Moving on through this solo, Herbie employs a quite pianistic idea to lead into the third solo chorus.

With these nine and a half measures, Herbie plays one of the most pianistic ideas in this entire solo. While another musician could work out most of his phrases on their instrument this phrase remains unique to the piano. Without a doubt, Herbie executes this idea with both of his hands. His right hand plays the first and second eighth-note triplets and his left hand plays the last. Playing this texture at tempo involves extra attention to releasing the right hand thumb in time to allow the left hand to play that note again.

This shape possesses a lot of similarities with a shape in Beethoven's second piano sonata (Opus 2, A Major). In the first movement, Beethoven wrote these measures

Here is a link to the Beethoven lecture where Schiff details this passage.

In the Beethoven, the left hand emphasizes the first note of each group. While the rhythmic emphasis remains similar, Herbie contrasts with piano technique; the fifth finger on his right hand emphasizes the first note each group. Beethoven's phrase plays the lower note, then a note one octave higher, and finally it repeats the lower note. Herbie's second note is one octave lower and then the left hand repeats the same lower note. Beethoven's phrase descends and ascends following an E major triad while Herbie plays a meandering scalar idea. These differences aside, they both draw on a similar pianistic texture and both almost certainly use two hands to execute it.

Herbie's meandering scalar phrase also creates an interesting pattern when examining the entire nine measures. Assuming that beat one of the top of the tune's form remains a target, this pattern repeats/develops every six beats. Herbie plays six beats of the running eighth-note triplet before the top of the form (m3-4 in the above example). Then, the first six beats of the third chorus are repeated exactly three times (m5-9). The following six beat pattern starts with the same first four beats but then Herbie changes the remaining notes (m10). Instead of playing G's and Bb's, he now plays F#'s and A's. These two notes surround the downbeat of the following measure. This remains the last instance of his six beat pattern. In measures 11 and 12, Herbie plays up and down the first five notes of the F minor scale to resolve the entire idea.

Later in that same chorus, Herbie plays "the lick." If you are not familiar with the lick, watch this video.

While Herbie's example is not an exact match, it's definitely close enough. And that Bb grace not that he plays before the dotted quarter note C? Yeah, it's the lick.
This writer feels compelled to call out Herbie's use of the lick. Herbie plays on such a high level all through this take and all of a sudden there's the lick...

As mentioned earlier, Herbie plays a total of four choruses. After the fourth solo chorus, Ron and Tony play through the form once. Neither plays a "solo" in the same way that Herbie did. Then the trio plays the outhead following the same arrangement as the beginning. Following that, the group tags the ending while Herbie improvises more. This ending technique comes from the Miles Davis bands. Many studio and live versions of tunes like "All of You" and "If I Were a Bell" include soloing over a tag at the end.

Most of Herbie's improvisation at this part of the tune contains similar language to his earlier solo. Immediately before Herbie cues the end of the vamp, he plays a particularly nice idea.

In the middle four measures from the above example, Herbie plays an Eb Major triad descending. Each time he plays the triad the notes are all on different beats. It remains a nice example of rhythmic displacement. The last four measures in the above example show Herbie referencing the melody of T.O.B.M. and cueing the ending chords to this recording.

Last, here is the transcription of Herbie's solo. 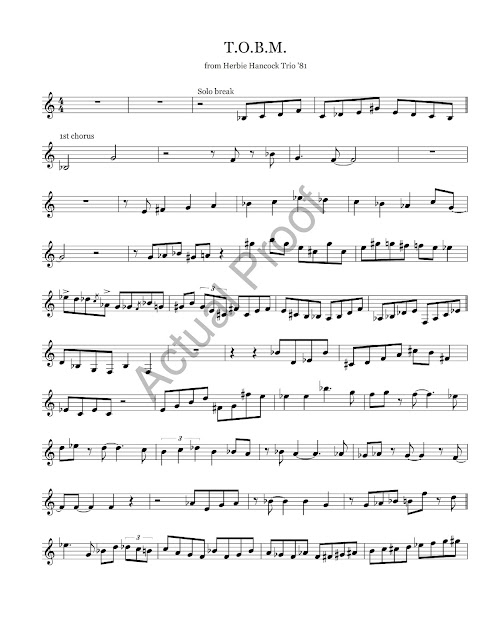 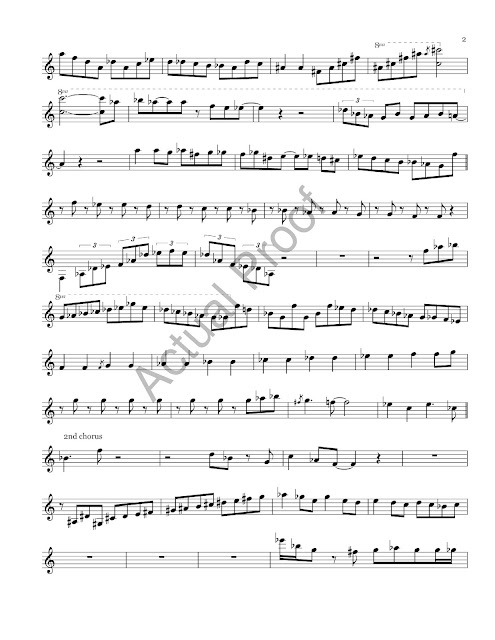 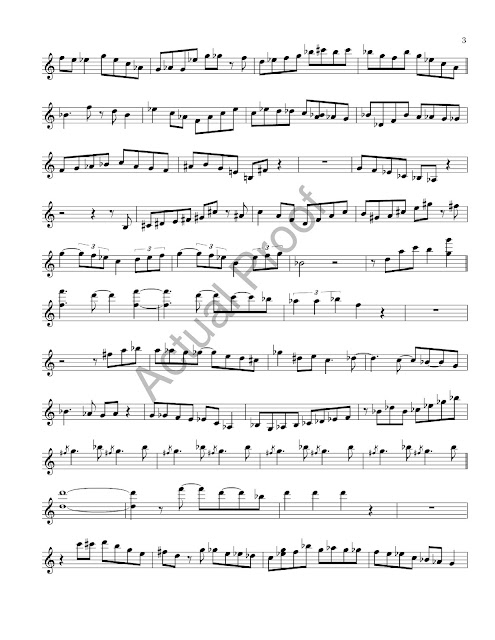 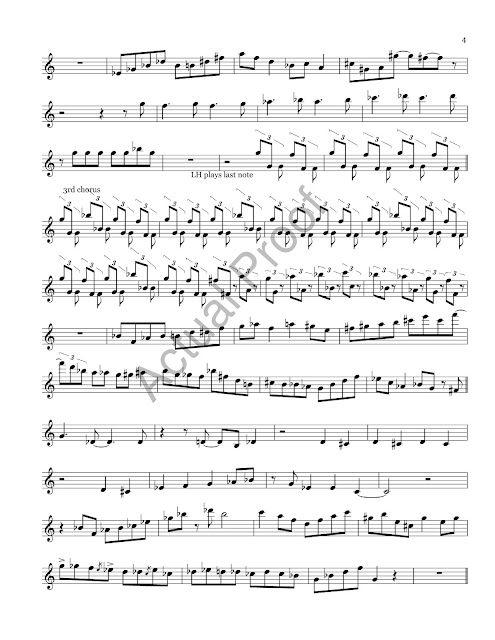 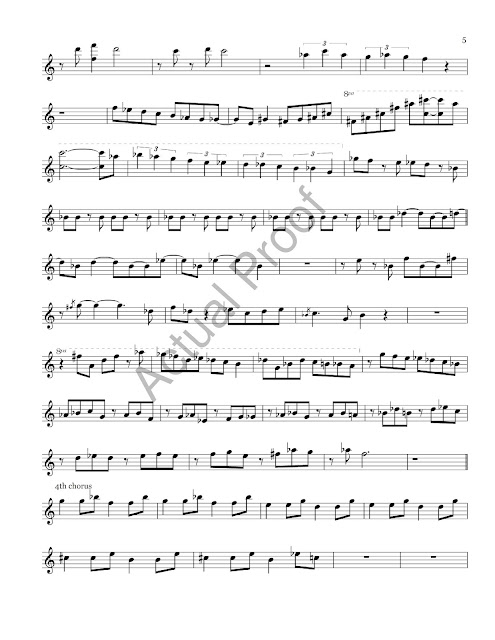 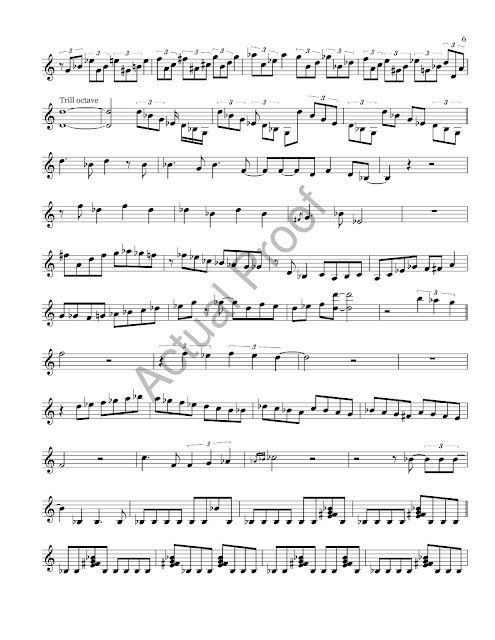 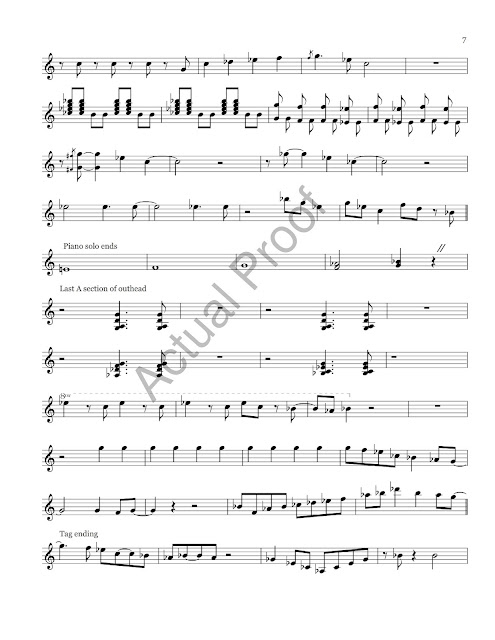 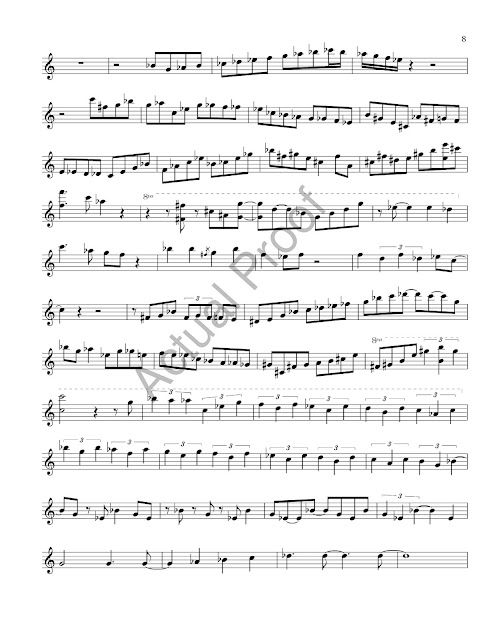 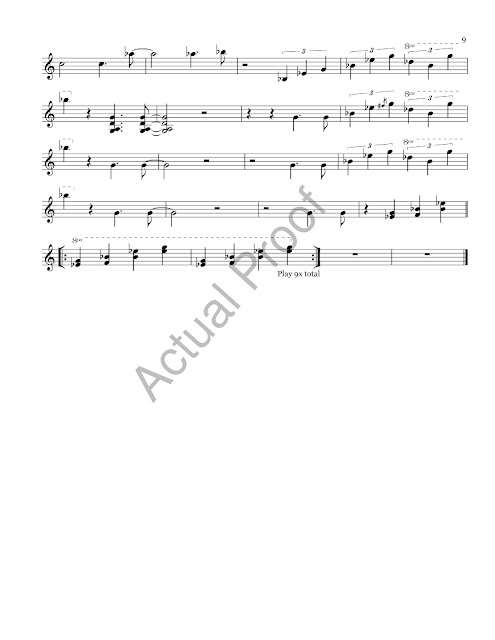 *Originally published under a pseudonym on September 20, 2015.
Posted by Patrick Fink at 7:02 AM