Chris Farley aside, this post deals with one of Herbie's most well-known tunes.

Herbie revealed in the first Norton lecture that the Frank Foster tune "Shiny Stockings" inspired "Dolphin Dance." He mentions this huge detail almost in passing while recounting how he assembled a big band at Grinnell College.

Without that lecture, this writer would probably never connected the two tunes. Herbie borrowed one unique harmonic device from Frank Foster though - ii V's ascending in whole steps. Measures nine through sixteen of "Shiny Stockings":

Excluding the Db-7 in measure ten, Frank Foster wrote ii V's ascending in a whole step pattern with one chord per measure. They bring the tune to Cmaj6, a major 3rd away from the original tonic.

Luckily, since this is my blog instead of a grad school paper, you can tediously flesh out how Frank Foster and Herbie arrive and depart from the whole step ascending ii V pattern.

Here is a link to the recording of "Dolphin Dance" from Maiden Voyage.

Aside from the ascending whole step ii V's, Herbie included multiple pedal points, non-diatonic ii V's, and other upper-extension filled chords. The tune travels to key centers that lie a third away from the home tonic of Eb major (C minor in the fifth measure and G major in measure seventeen).

The solo form adds another layer of potential confusion to this tune. Herbie constructed the last four measures of the tune as a variation of the first four measures. They are both over the Eb pedal point, use similar melodies, and conclude with a ii V to C minor.

Below is a chart for "Dolphin Dance." 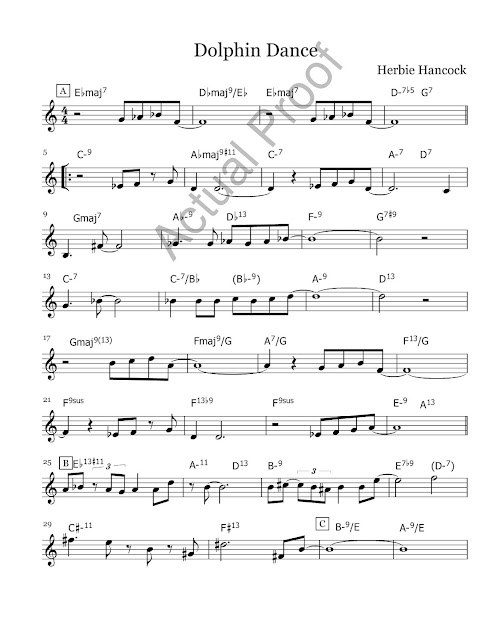 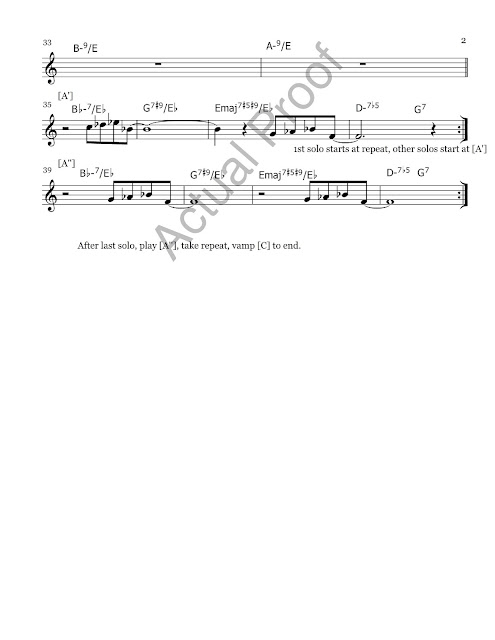 On a side note, pianist Ahmad Jamal recorded "Dolphin Dance" on his 1970 piano trio record The Awakening. This recording includes an incorrect performance of the form. Jamal starts and concludes with a vamp over the E pedal. In between, they play through Herbie's form four times and each time they repeat from measure thirty eight to measure one instead of measure five.

Yes, quantitatively Jamal plays the from 'wrong'. However, who cares? Jamal's version still packs a lot of highly creative trio playing. He must have been onto something as countless hip hop artists chose to sample Jamal's version instead of Herbie's version. The Actual Proof blog points out this detail about Jamal's performance of the tune's form purely for thoroughness.

Now onto Herbie's piano solo over "Dolphin Dance." He starts with some swinging ideas that outline the chords and follows that with a motif (measures 19-24). The end of this post contains a full copy of the solo transcription. In general, he follows the tune's harmonic contour and outlines the harmony.

Herbie plays a particularly cool triplet idea to close his first chorus (measures 35-38). The previous measures include relatively straightforward eighth note triplet ideas over the E pedal point. These notes wind back and forth usually as a half step or whole step interval as they gradually ascend in pitch. Measures 35-37 all include triplet rhythmic ideas and specific harmonic shapes over an Eb pedal point. Starting in measure 35, Herbie then plays four note groupings of eighth note triplets. These groupings divide each measure of 4/4 time into three equal parts. This rhythmic idea continues through measure 38 and concludes at the top of Herbie's second solo chorus.

On top of that rhythmic idea, Herbie chooses notes that outline specific harmony for each measure. Starting in measure 35, Herbie arpeggiates a Bb-9 chord. He plays it descending and starts on the 9th scale degree. Measure 36 follows a less straightforward pattern. Herbie's note choices in measure 36 all come from the G dominant diminished scale (alternating half steps and whole steps: G, Ab, A#, B, C#, D, E, F, G). Starting on A# (Bb in the transcription), Herbie plays another descending shape following his rhythmic grouping from the previous measure. This descending shape follows the interval pattern of minor third, perfect fourth, and minor third.

Herbie's note choices in measure 37 continue to increase the tension. Here almost all of his notes originate from the symmetrical augmented scale (alternating half steps and minor thirds: G, G#, B, C, Eb, E, G). The Db played in the in the middle of beat three does not belong to this scale. Herbie starts on a Eb two octaves above where the previous measure ended and plays a descending shape. The first descending shape in measure 37 follows the same interval pattern in measure 36 (minor third, perfect fourth, and minor third). The two remaining rhythmic groupings do not follow the same interval pattern. Next, Herbie arpeggiates an Eb major triad in a descending shape to finish this first solo chorus (measure 38).

Despite scale names existing for those sounds Herbie plays distinctly chordal shapes. In other words, yes this blog can provide a jazz theory scale name like dominant diminished or symmetrical augmented but these names barely describe the true effect of Herbie's note choice. Herbie does not run those scales in an ascending or descending shape like a major, minor, or blues scale. His note choices all lie at least a third apart from each other. Herbis is thinking "chord tones, chord tones, chord tones."

Another highlight of this solo includes a rhythmic idea in the second chorus. Over the G pedal point in measures 47-49 Herbie plays sixteenth notes in a six note repeating pattern. The pattern ascends with the notes G, A#, B, D, and then finishes with B, C before restarting. This pattern originates from the dotted quarter note polyrhythm.

Hearing the D as the emphasized/accented note in each six note grouping shows attention to beat 2, the and of 3, beat 1, the and of 2, beat 4, etc. This means that the first three notes (G, A#, and B) are a type of antecedent.

This rhythmic concept - sixteenth notes in groupings of six and outlining the dotted quarter note polyrhythm - may seem straightforward and potentially even obvious compared to other possible groupings. However, the added 'turn' when the ascending shape descends and repeats a note (B), and then finishes with an additional neighbor note (C), make this idea special. Herbie may have arrived at the additional turn out of necessity; we only have five fingers on each hand. While the recording does not show any left hand chords during measures 47-49, it is unlikely that this passage was played between two hands. Herbie's left hand tends to complement and interact with his right hand rather than serve as a piano technique aid. Also, assigning one finger per note allows the right hand to execute this idea. 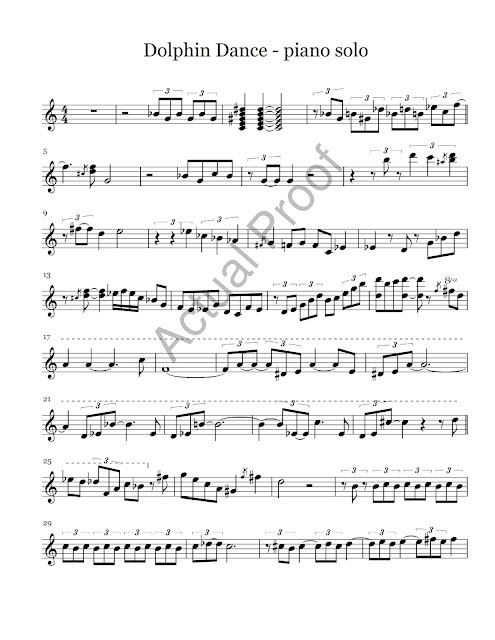 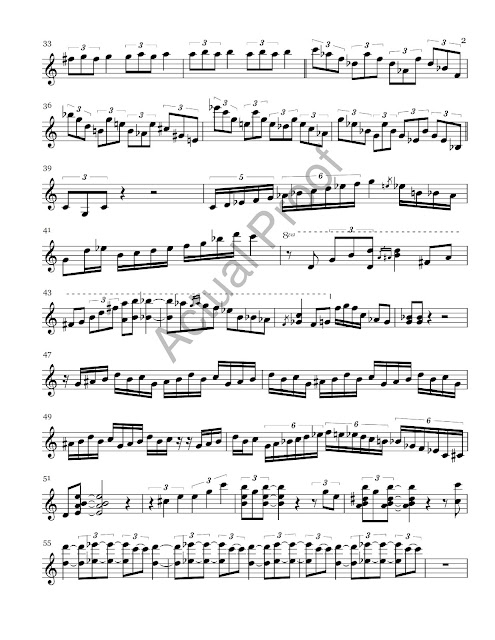 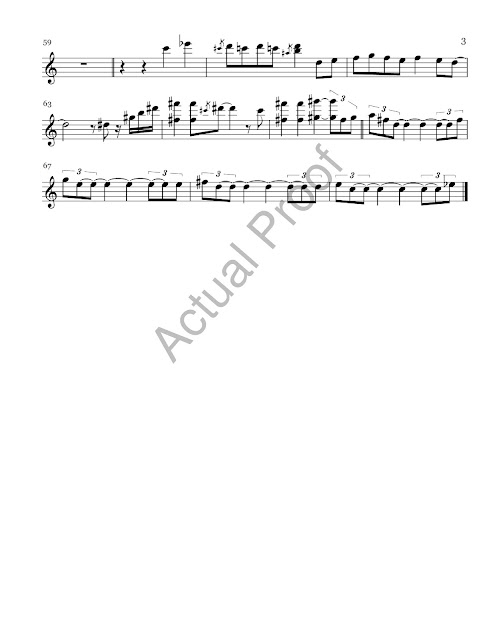 "Dolphin Dance" is one of Herbie's best-known tunes for a reason. This first recording and solo leave that much of an impression on people. Go correct your fake book, or not.

*Originally published under a pseudonym on March 3rd, 2015.
Posted by Patrick Fink at 2:15 PM