As you may have guessed from the title, this post delves into the classic Wayne Shorter tune, "Fee-Fi-Fo-Fum" from the 1964 record, Speak No Evil. This album documents one of only two instances where drummer Elvin Jones and Herbie Hancock record together (the other one is Bob Brookmeyer and Friends, recorded a few months prior). Trumpeter Freddie Hubbard and bassist Ron Carter round out the personnel for Speak No Evil.

On a side note, Speak No Evil was recorded on Christmas Eve in 1964. Anyone else glad that Blue Note did not make the group play any holiday tunes for the session? Although, that probably would have been killin.


"Fee-Fi-Fo-Fum" is the second track on the record. The 24-measure ABA tune consists of three eight measure phrases. Wayne threw together some unique harmonic ideas in the A sections and hints at the blues in the B section. The tune is in Bb major. Pianist and educator Steven Strunk, wrote a detailed paper that elaborates on this. I would like to add though that the eight measure introduction contains four measures of an F pedal point. This dominant pedal point further helps establish the key.

Herbie, Ron, and Elvin play the eight measure introduction. It's likely that Herbie had some of the voicings worked out or potentially even the whole thing. This introduction is much more involved compared to the type of introduction that most working pianists will typically utilize. Although, there is certainly a time and place to play the last eight measures of the tune, establish the groove/tonality, hint at a chord change for the bassist, and hopefully teach someone the correct way to end the melody.

Here's the transcription of the introduction. 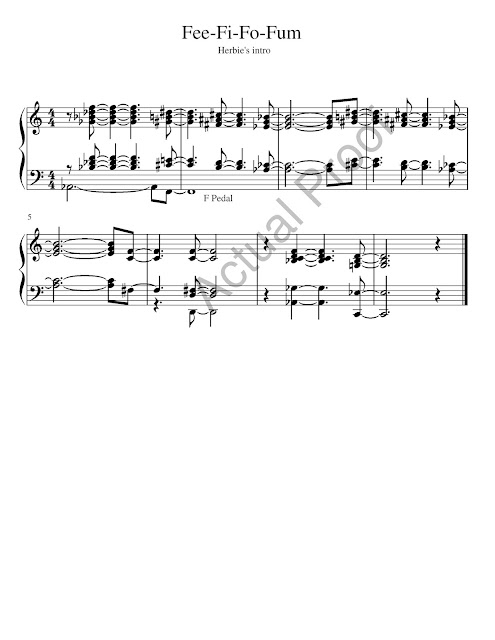 Starting on the last beat of the first measure and extending through measure five those chords are all minor major 9 chords (root, minor 3rd, perfect 5th, major 7th, and 9th). However, they are all played over an F pedal. One potential error is that the major 7th (second note from the top in Herbie's voicings) may be played under the root sometimes (thus the first chord would instead be spelled from the bottom to the top C, Db, Fb, Ab, Eb). It's quite tricky to hear exactly where the major 7th lies in the voicing. Either way, it's still an awesome intro that uses constant structure minor major 9 chords.

Aside from the notes on the page, the rhythm and dynamics make this intro pop. Note the huge accent on the Ab7 chord on beat two of measure seven. It's the only non-syncopated chord in the whole introduction and the players all smash into it. They play the next chord much quieter and set up the melody for the tune.

Next, let's get into Herbie's solo on this tune.

Herbie solos last on this track, following a solo from Freddie and then Wayne. His solo begins around the 3:53 mark of the song. Here's the transcription of his chorus. 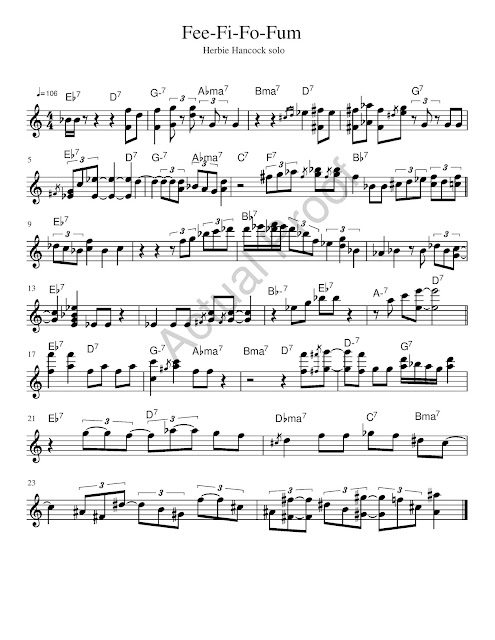 In general, Herbie plays a lot triplets and blues language throughout this solo. The harmony in "Fee-Fi-Fo-Fum" possesses a lot of subtle half-step connections that many talented musicians will usually emphasize while playing. The most striking aspects of this chorus are not how Herbie 'plays the changes' but rather the groove and articulations. Check out m25-26 starting the last A section of his solo. Herbie plays that phrase with a particular crispness and you can hear Elvin respond beautifully with sharper snap of his hi-hat cymbals for a few beats. Then over the last two measures of Herbie's solo he plays a sweet idea that has four note groupings of eighth note triplets.

*Originally published under a pseudonym on January 18th, 2014.
Posted by Patrick Fink at 1:51 PM