Although Wayne Shorter writes some sweet tunes, it's about time that this blog tackles another one of Herbie's.

The first recording of "The Sorcerer" shows up on the Miles Davis record, The Sorcerer. That track was recorded on 17 May 1967. This is the familiar Miles Davis' second great quintet and the personnel includes Miles Davis - trumpet, Wayne Shorter - tenor saxophone, Ron Carter - bass, and Tony Williams - drums.

Ten months later, Herbie recorded "The Sorcerer" again for a (mostly) trio record called Speak Like a Child. This album retains Ron Carter on bass but adds Philadelphia's Mickey Roker on drums. Speak Like a Child was recorded in two days on March 7th and 9th, 1968.

Many other recordings of this tune exist. Herbie played the tune in the 1980's with the second iteration of his VSOP quintet (Wynton Marsalis, Branford Marsalis, Ron Carter, and Tony Williams). More recently, it was the opening track of Herbie's 2002 release Directions in Music: Live at Massey Hall that featured Michael Brecker, Roy Hargrove, John Patitucci, and Brian Blade.

On the first recording, rather than have a specific soloist explore the tune after the head melody Wayne Shorter and Miles Davis trade eight measure phrases. When Wayne and Miles are finished trading, the band plays the head melody twice as an interlude. Then Miles, Wayne, and Herbie all tag the ending of the tune and repeat the last melody fragment over eight measures. When Herbie plays the last melody fragment for a second time it signals the end of the tag and the beginning of the form for his solo.

Here is a link to the first recording. Herbie's solo begins around 3:15.

Herbie then proceeds to solo for five choruses before the head melody returns. Herbie solos with single note lines while his left hand punctuations remain barely audible. This stylistic approach bears many similarities to the tune "Prince of Darkness" (the opening track of the Miles Davis record The Sorcerer).

To grossly over-generalize, normally when jazz musicians improvise over a tune they use melodic language generated from the tune's harmony. Playing the root, third, fifth, and seventh of each chord in a tune explicitly states the harmony. With 'good' rhythm, it's arguably an effective improvisation method.

Instead of explicitly outlining the tune's harmonic progressions for each chord Herbie varies his melodic content. Sometimes he will spell out a particular harmony. However, more often he will pass over that part of the form without the specific notes that reflect the tune's chords. Herbie even sometimes plays two, three, or four measures before landing on a note that clearly originates from the tune's harmony.

Herbie varies his melodic language with two devices. First, he uses octatonic scales (also known as diminished scales). They are built using an alternating whole step-half step pattern. Diminished scales are symmetrical in nature and lack the same quality of being 'at rest' that major scales possesses.

Here is a complete copy of Herbie's solo on the first recording. 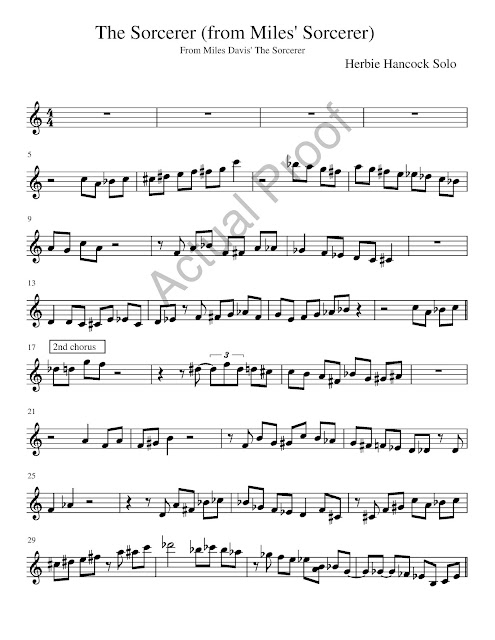 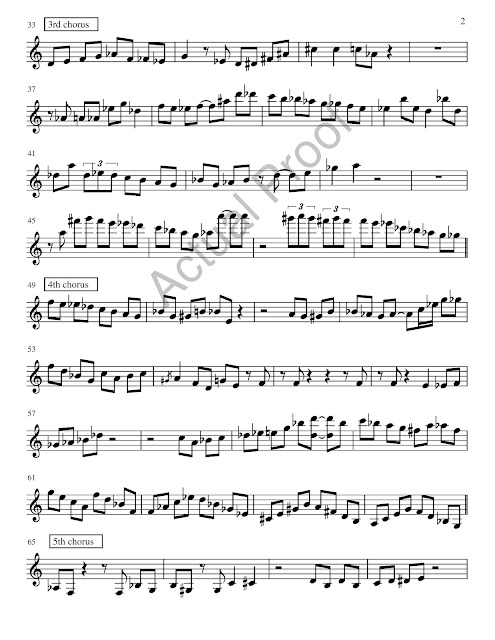 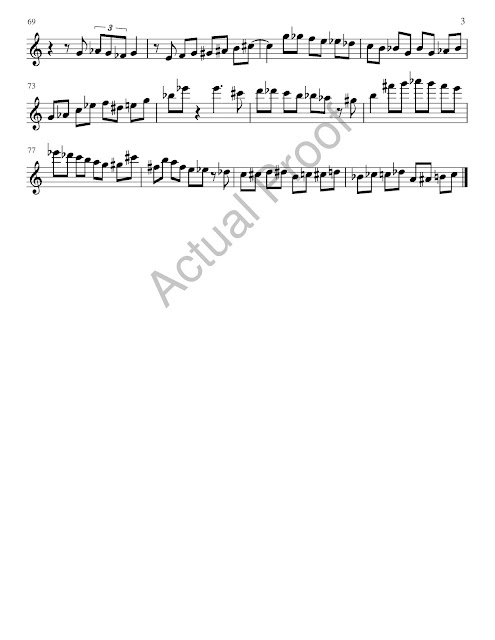 Now onto the second recording...

Herbie plays the head melody twice at the beginning of the song and twice at the end. Ron Carter and Mickey Roker play completely accompanying roles; there is no bass solo or trading with the drums. Herbie even plays a type of shout section reminiscent of big band recordings towards end. This occurs over the first eight measures of the form for the final three solo choruses.

Herbie takes a total of fourteen choruses. Contrary to the first recording, Herbie uses chords throughout this solo in both hands. Jazz pianists have the unique opportunity to have a dialogue not only with the bassist and drummer while improvising but also between their hands. The left hand can provide an answer to a phrase, or amplify a high point of a phrase by accenting a note while the right hand plays.

Here, this blog needs to further give credit where credit is due. I transcribed this second recording after I finished the first. I even started to add Herbie's tasty left hand comping rhythms. I was eager to then share my work; however, saxophonist and educator Remi Bolduc did so first. His youtube video provides a detailed transcription of not only Herbie's right hand lines but also includes Herbie's left hand comping and Ron Carter's bass lines.

Here is a link for Remi's work:

Go ahead and replay that video.

Our transcriptions were not identical matches. However, this blogger possesses no interest in getting in an internet argument over a few rhythms or notes.

Herbie's use of rhythmic displacement in the eighth and ninth choruses standout when compared to the first recording. This displacement generates a lot of tension. For example, leading into the eighth chorus Herbie introduces a motif that he continues through the next six measures, while he adjusts the notes to fit the tune's harmony. The motif first appears in measure 126 as eighth notes. Then it appears again in measure 128 at the end of the seventh chorus with a sixteenth-note ornament added. Then there are four beats of rests where the same motif could have been played again. In the second measure of this chorus, Herbie plays the motif again with the same rhythmic placement, only the top two notes have changed. Next, Herbie plays the phrase with the same rhythmic placement as the first two instances but he changes the sixteenth note ornament to an eighth note triplet idea. The fourth, fifth, and sixth examples of this motif are all displaced rhythmically from the first three examples and recur every three beats. This briefly implies a 3/4 meter.

Here is a transcription of that instance. The double bar line indicates the end of the seventh chorus.


Then, leading into the ninth chorus, Herbie starts another motif and again displaces it rhythmically. In the transcription of the first part of the ninth chorus (below), this motif starts in measure 144.

In both the eighth and ninth choruses the pitches of these motifs follow an ascending pattern. Also, in both instances of rhythmic displacement Herbie generally decreases the amount of beats between recurrences of the motifs. One exception occurs in the ninth chorus (measures 148-149 of my transcription above) where he allows two full beats to pass between phrases that were only separated by one and a half beats.

Last, Herbie uses constant structure patterns in both recordings of "The Sorcerer."  In the first recording this idea begins on the downbeat of measure 61, four measures before the fifth chorus begins.

Similarly, in Herbie's solo on the second recording he plays a constant structure minor seventh pattern while exiting the twelfth chorus (measures 207-208 below). This pattern is six minor-seventh chords played as eighth-note triplets over two measures. Since four notes comprise each minor seventh chord, playing this pattern as eight note triplets implies the larger rhythm of half note triplets in those two measures. Rhythm aside, this constant structure pattern follows the root motion in ascending half steps rather than descending whole steps as in the first solo.

If you are thirsting for more Herbie on "The Sorcerer" here's a link for another burning live version.

And for thoroughness, my transcription of Herbie's solo on "The Sorcerer" from Speak Like a Child follows. 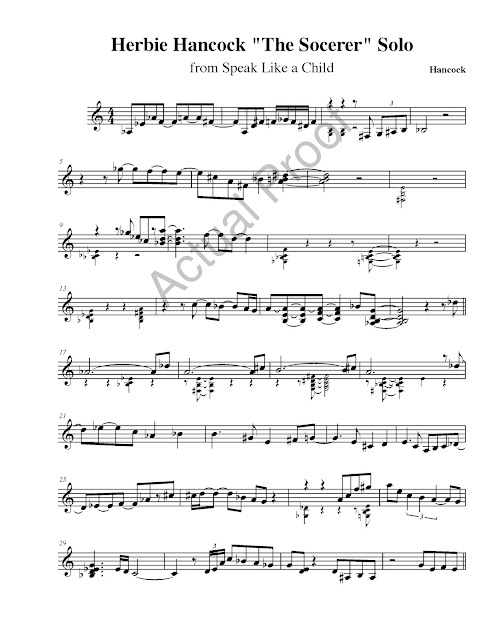 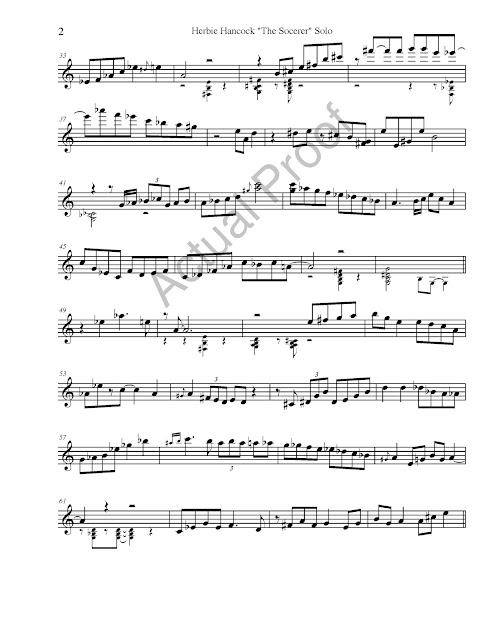 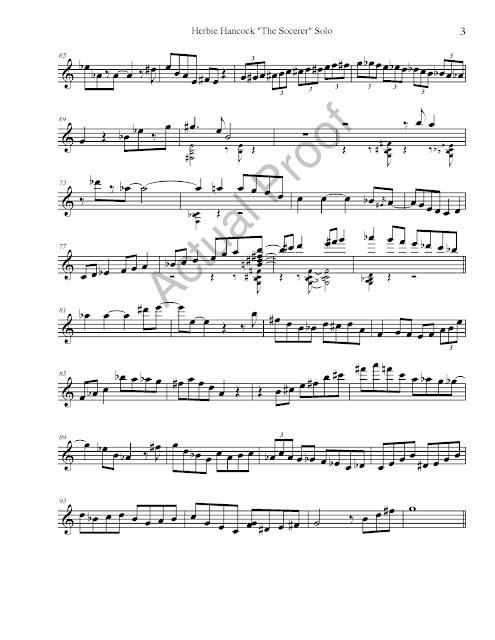 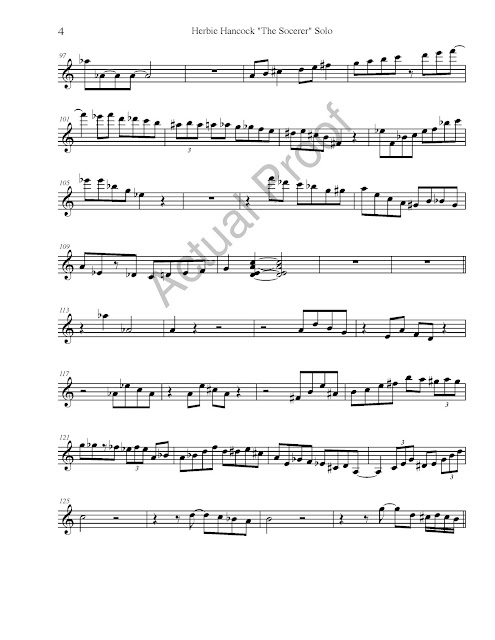 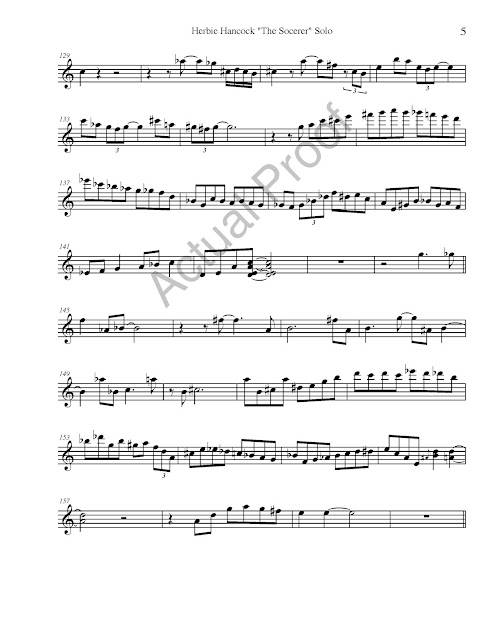 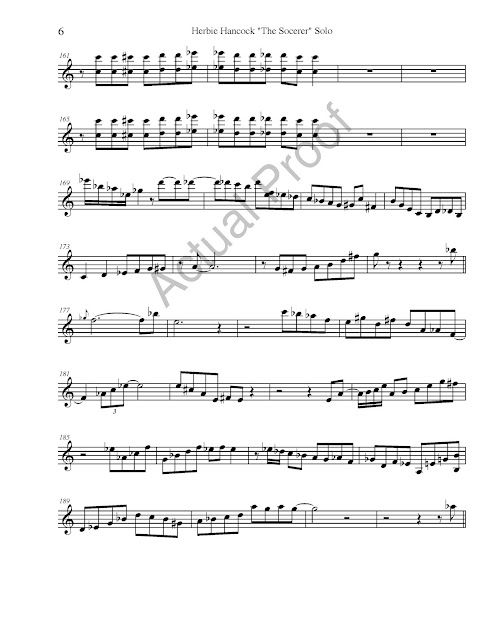 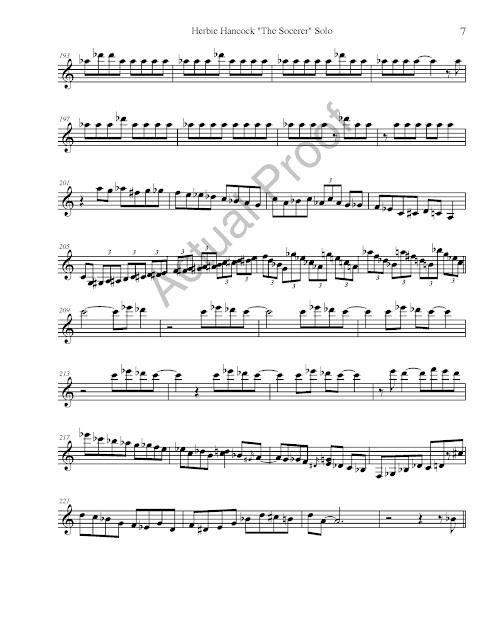 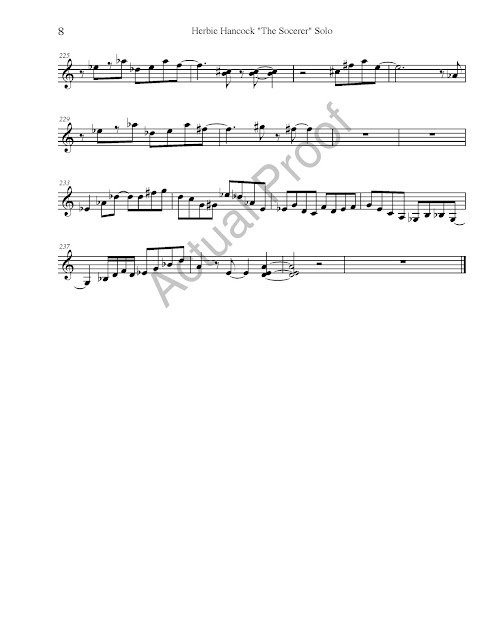 *Originally published under a pseudonym on 25 February, 2014.
Posted by Patrick Fink at 6:39 PM