This post expounds on one of the single best piano feature trio recordings ever. “First Trip” appears as the third track on the 1968 album Speak Like a Child. A septet album, it includes Thad Jones on flugelhorn, Jerry Dodgion on alto flute, Peter Phillips on bass trombone, Ron Carter on bass, and Mickey Roker on drums. The album specifically features Herbie as a soloist, composer, and arranger. He takes the only solos, wrote five of the six tunes, and arranged the horns for the melodies. “First Trip” distinguishes itself as the only trio track on Speak Like a Child.


As a composition, “First Trip” follows the common 32 measure AABA form and is in the key of F major. Ron Carter penned the tune. He arguably wrote it as a reworking or almost a contrafact over the Thelonious Monk composition “I Mean You.” Both tunes are in F and follow the 32 measure AABA solo form. However, “I Mean You” contains a riff interlude and the tunes possess slightly different harmonic rhythms. In the A sections, both “I Mean You” and “First Trip” start and finish on the tonic. Their harmonies also first change to Db in the third measure. “I Mean You” returns to the tonic on the seventh measure though whereas “First Trip” returns to the tonic on the eighth measure.

Here is a chart for Thelonious Monk's "I Mean You." 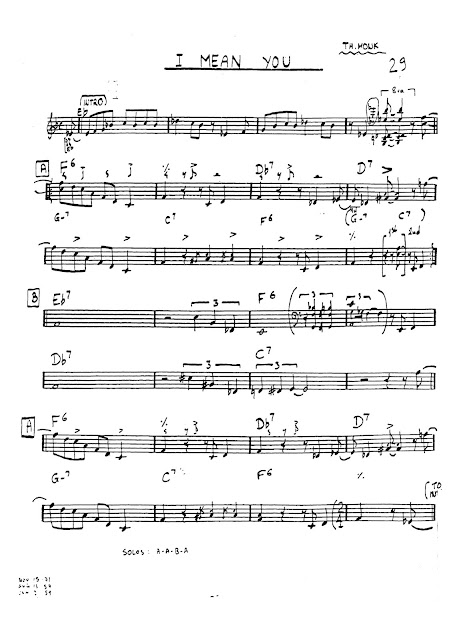 And here is a chart for Ron Carter's "First Trip." 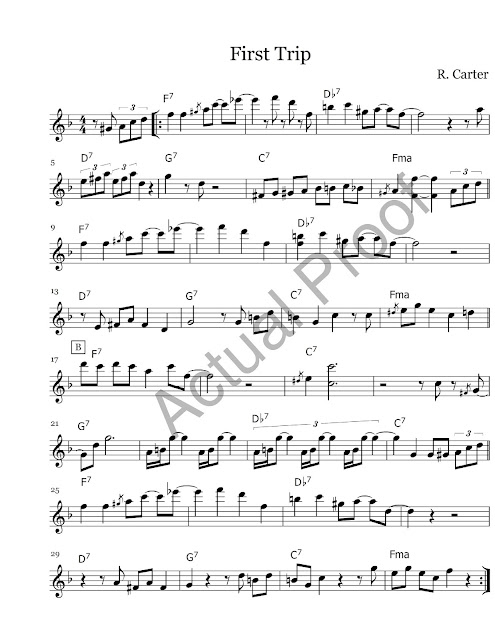 “First Trip” also makes an appearance on the Joe Henderson record Tetragon. They play it as a quartet though with Joe Henderson on tenor sax, Kenny Barron on piano, Ron Carter on bass, and Louis Hayes on drums. For Tetragon, “First Trip” was recorded September 9, 1967 and a little more than five months later, “First Trip” was recorded for Speak Like a Child on March 6, 1968. Both albums were released in 1968 though. Aside from lacking a saxophone, Herbie’s version is played quicker (quarter note = about 176 compared to quarter note = about 120 on Tetragon).

With no introduction, Herbie's trio plays the tune starting with the pickup notes for the melody. After the inhead, Herbie takes a solo for seven choruses. Neither Ron Carter nor Mickey Roker get specific time to solo on the tune. After Herbie’s seventh chorus, the trio proceeds in playing the outhead and a brief ending before the tune concludes. At about six minutes in length, “First Trip” allows Herbie to stretch out on the tune and play a lot of ideas.

One of the first ideas worth highlighting happens in the beginning of the second chorus (measures 66-73). In measure 67, Herbie starts a motif that eventually morphs into a polyrhythm. He plays an Ab above the staff, followed by the Bb (an upper neighbor tone), and then the same Ab. Then Herbie moves the motif down a fifth, up a minor third, and then down another fifth. In these two measures, each part of the motif follows the rhythm of a quarter note followed by two eighths.

By measure 69, Herbie adjusts the rhythm and plays an all-eighth-note idea for four measures. As Herbie does frequently, this idea implies 3/4 time while playing a tune in 4/4. Restarting the idea every three beats accomplishes this. Looking closer though, within each three beats there lies two smaller phrases of three eighth notes each. These smaller phrases are comprised of a principle note, an upper neighbor tone, and then the principle note again. The first smaller phrase is E and F#. Then Herbie moves down a fifth - like before - and plays A and B. The third phrase here is D and E. Herbie then alternates between the second and third phrases until the idea concludes.

Implying 3/4 while playing a tune written in 4/4 works out cleanly every three measures. Basically, starting a phrase with this goal on the downbeat of a measure and playing it for three measures will mathematically lead to another downbeat. Sometimes a musician will continue to imply 3/4 time at this point for a longer idea. In the above instance, Herbie plays only three more beats of the same pattern before changing and arpeggiating a D#-7 chord with his right hand line.

Herbie’s careful method of arriving and departing from the 3/4 polyrhythm shows an advance understanding of melodic phrasing. Herbie disguises the idea. Instead of

Herbie linked the polyrhythm idea to a previous phrase, played it three beats longer than would work out cleanly, and used that melodic momentum to continue into and arpeggiated idea.

Herbie plays the same four notes for almost three measures. Instead of analyzing the precise alteration these notes imply, the best explanation lies in Herbie allowing the rhythm and repetition of the idea to take priority over the exact pitches.

Next, the beginning of Herbie’s third chorus deserve analysis. He introduces a riff in the last measure of the second chorus that spills into the first measure of the third chorus (m97-98). For the two note pattern, (Eb C Eb C Eb), he places the notes rhythmically so that the Eb’s sound a dotted quarter note apart from each other. For the next sixteen measures, Herbie develops this motif and explores different syncopations.

In measures 99 and 100, Herbie plays a variation of the original motif. First, this variation only contains four notes instead of five (either C Eb C Eb or B Eb B Eb). Second, this variation starts on the lower note instead of starting on Eb. Similar to the original motif, the Eb’s still sound a dotted quarter note apart from each other. However, the Eb’s show up on the and of beat two and on beat four.
Measures 101 and 102 start out as a somewhat predictable variation of the original motif. The pitches this time are Bb and Eb, the Eb’s start a dotted quarter note apart from each other, and occur on the and of three and on the first beat in m102. That measure 102 though includes a specific moment that breaks the pattern where the motif bounces down to Bb and then back to Eb on beat two instead of on the and of two. Herbie set the listener up to expect the next Eb to occur a dotted quarter note later and then plays it an eighth note earlier than expected.

The next iteration of the motif starts with an eighth note pickup into measure 103. Herbie alternates from Eb down to Bb and then back for five total notes. While the middle and last Eb’s are rhythmically a dotted-quarter note apart from each other the first and middle Eb’s lie a full two quarter notes apart.

Through measure 103, Herbie gives the listener five versions of the motif. Between the first and second motifs, Herbie changes the starting beat. Between the second and third motifs, Herbie only changes the lower pitch. The fourth and fifth phrases start on different beats, changes pitches, and show Herbie adjusting the rhythm within the motif. For the fourth motif, Herbie truncates the beginning part of it so that the Eb’s occur sooner; for the fifth motif, Herbie lengthens the same part so that the Eb’s occur later than both the fourth motif as well as the earlier iterations.

Measures 104 and 105 sound like they could be a phrase that shifts out of the exploration of the motif from measure 97 and 98. However, instead they prove only a short break because by the last eighth note of measure 105 Herbie returns to developing the motif. Measures 106 and 107 show Herbie trying two other variations of motif that alternate between Eb and C for pitches.

Herbie links the string of motif iterations to the remainder of the solo in measure 112. The phrase starts as a further development of the earlier motif. While the pitches changed to C and F, the rhythm and shape of the phrase contribute to the connection. By the end of measure 112 though, Herbie plays a chord-tone-derived shape that completely differs from the earlier motif.

Measure 98 includes includes a clear example of the first technique. This occurs immediately after Herbie first introduces the right hand motif. There are three full beats of rests before the motif returns again in measure 99. On the and of beat three in measure 98 Herbie injects voicing for F7#9. In addition to the amount of rests between motif iterations, Herbie also accents this chord and plays it louder than others. These both contribute to this left hand comp sounding like a direct answer to the right hand.

Measures 104, 106, and 107 show Herbie using the intentional chatter technique. There remains smaller gaps between the right hand phrases and Herbie does not accent these chords as much. Rather than considering these left hand chords superfluous they reveal a constant awareness of the rhythmic pulse in both right and left hands.

Herbie continues with more swinging lines and tasteful rhythmic ideas. The end of the fifth chorus into the sixth chorus (measures 182-196) contains another motif that Herbie develops similar to earlier. While it contains more repetition than the motif at the beginning of the third chorus, Herbie still adjusts the pitches to fit the underpinned harmony of the tune. The first four iterations of this motif all start on the third beat of the measure. However, the fifth one starts on the second beat (measure 190) and the sixth one starts on the first beat (measure 192). The rhythms within the phrase and the overall shape remain the same for the fifth and sixth iterations. Thus, Herbie moving the phrase a beat earlier twice creates rhythmic interest. 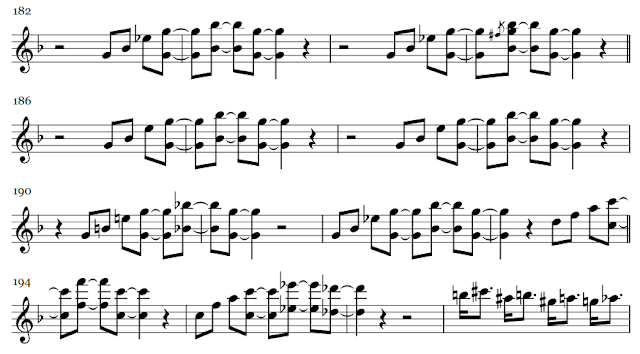 Another highlight-worthy moment occurs between the sixth and seventh choruses (measures 225-226). Arguably, the previous six choruses of piano solo contain more than enough for a suitable performance. Mickey Roker even switches from playing time on a ride cymbal to a two-feel pattern on the high-hat cymbals similar to what he played for the head of the tune. Herbie even plays the exact same melodic pickup phrase to lead into the head melody. However, and this may or may not have been a mistake, Herbie played those pickups a full beat early. The eighth-note triplets happen on beat three instead of beat of four and thus he arrives at the the pitch F on beat four instead of the first beat of the out head. Regardless of the potential mistake, Herbie carries on, playing a seventh solo chorus. Also, the group quickly reverses any slight drop in energy or intensity. Herbie continues with rhythmic ideas that explore various syncopations and longer eighth-note/eighth-note triplet lines. The last measure of the seventh chorus though (measure 257) does contain the correct rhythmic placement of the melodic pickup phrase.

Here is the full transcription of Herbie on "First Trip." 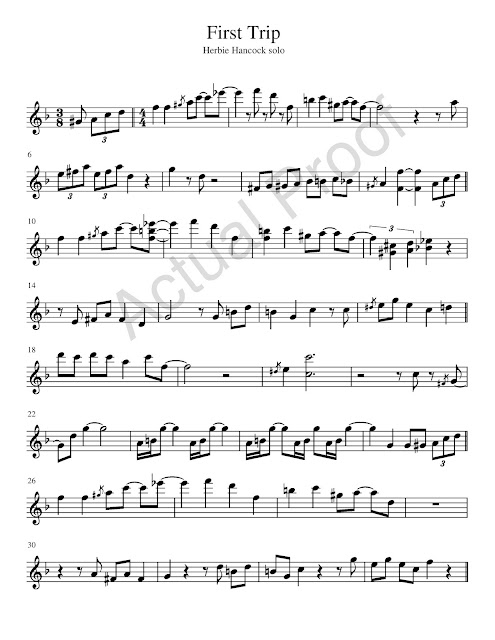 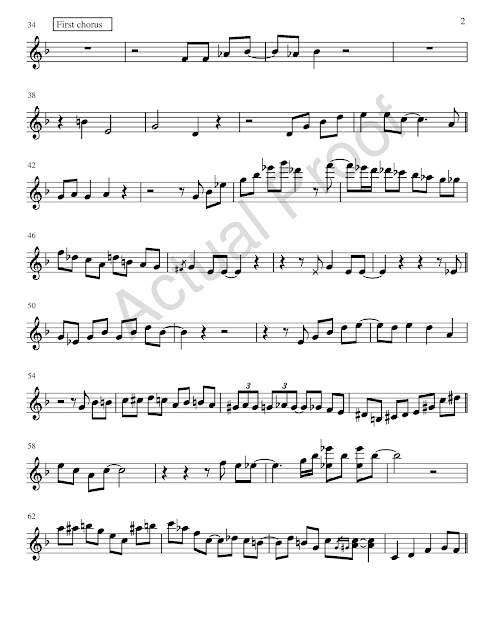 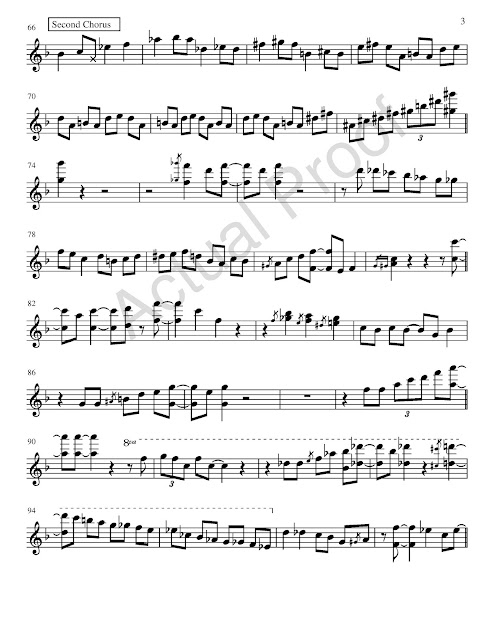 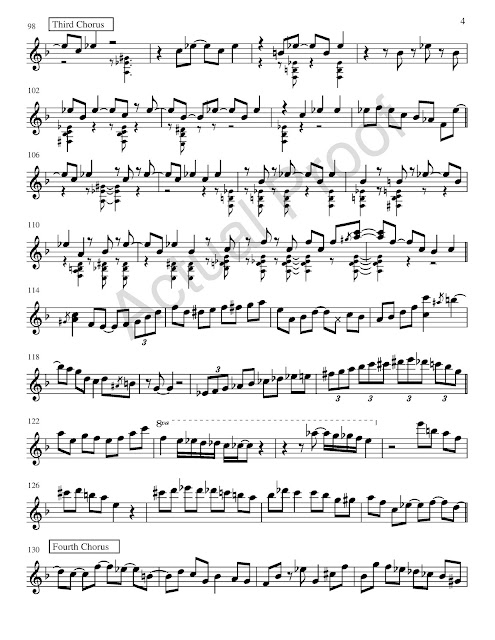 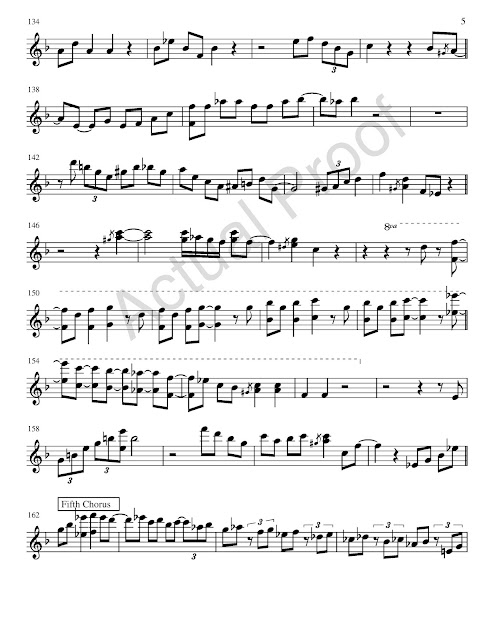 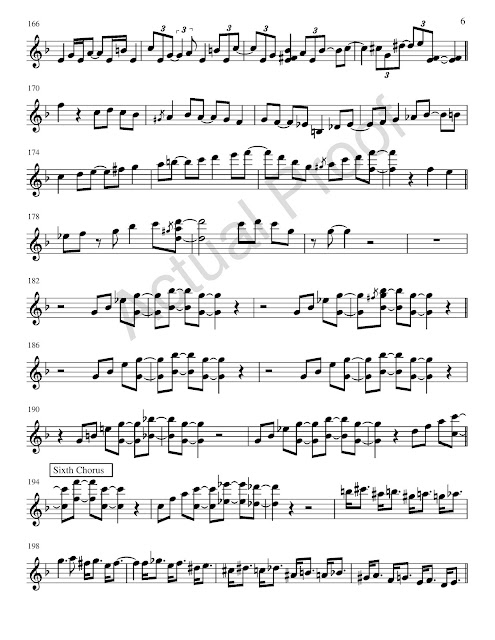 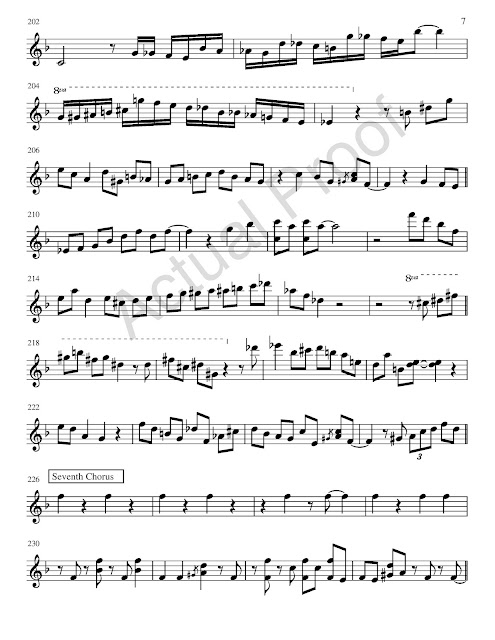 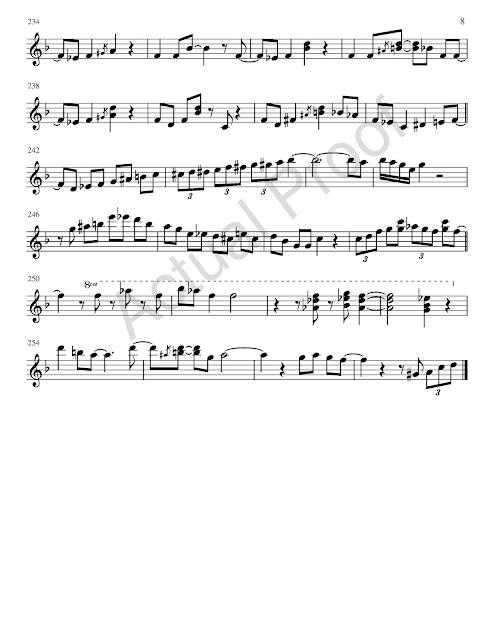 For comparison and further listening, here is a link to Herbie and Ron (with Billy Cobham instead of Mickey Roker) revisiting "First Trip" at a live concert in 1983.