Now to explore a Wayne Shorter composition and Herbie's impact on it. "Toy Tune" appears as the third track from Wayne Shorter's record Et cetera. The album was recorded on June 14th, 1965. For anyone keeping track of the timeline, this would be about two years after Herbie joined Miles Davis' band - in the spring of 1963 to record Seven Steps to Heaven - as well as only the second Wayne Shorter record with Herbie on the piano bench (the other was Speak No Evil which was recorded almost six months prior). Unfortunately, Et cetera was not released until 1980. In addition to Wayne and Herbie, Cecil McBee and Joe Chambers complete the quartet on bass and drums for this album.

Wayne Shorter composed four of the five tracks on the album; "Barracudas (General Assembly)" by Gil Evans remains the only exception. "Toy Tune" stands out from the other songs because of the tempo and swing. "Et cetera," the title track has a straight-eighth/broken groove feel, "Penelope" is a ballad, "Barracudas" is in 6/4 time, and "Indian Song" is in 5/4 time. "Toy Tune" contains a driving medium swing feel in 4/4 time.


"Toy Tune" follows a 28 measure AABA form where the B section is only four measures in length. Wayne's compositions favor atypical forms and lengths (not 12m or 32m). On the recording the quartet plays the head once, Wayne solos for four choruses, then Herbie solos for three choruses, and then the play the head once to finish. This post includes full transcriptions of both Wayne and Herbie's solos. Analysis of specific instances in Herbie's contributes to the overall tonality interpretation.

Here is a chart for "Toy Tune" 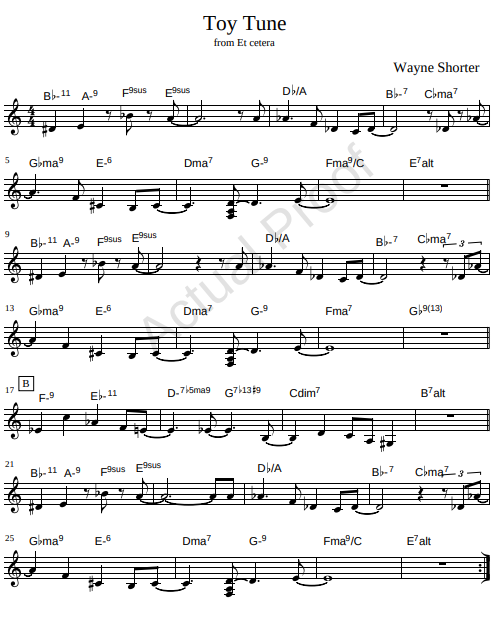 An investigation of every solo and composition by both Wayne and Herbie and how they contextualize an interpretation of "Toy Tune" would certainly be worthwhile. However, in the interest of brevity this post will draw conclusions only from the composition and two solos. Hopefully this correctly analyzes the primary information rather than risk a well-intended extrapolation that subjectively favors certain musical patterns and improvisatory devices.

As a composition, "Toy Tune" is mostly in the key of A major. The majority of the notes in the melody belong in the A major scale. The most frequent and longest held pitches are A, C# (or the enharmonic equivalent of Db), and E. Those three notes form an A major triad. On the other hand, there remain instances with notes that step outside the A major scale. In the first measure of the [A] sections the D# on the downbeat can be explained as an accented passing tone to E and the Bb on the and of beat three can be explained as a quick chromatic upper neighbor tone.

One of the strongest pieces of evidence supporting these three tonal centers lies in the harmonic rhythm and how Wayne and Herbie solo over the form. The third and seventh measures of the [A] sections as well as the third measure of the [B] remain instances where the chord receives four beats as opposed two or even one. The longer duration persuades the listener that those are tonic.

Music theorist Steven Strunk pointed out the importance of root motion in Wayne Shorter compositions. He described when the chord suffixes do not provide an obvious tonality the bass motion takes priority in establishing a tonality. 1 Thus for the head, an accented chromatic upper neighbor (Bb) precedes the tonic (A) and then another chromatic upper neighbor (F) precedes a dominant sound (E) that leads to (an admittedly unstable sounding) tonic in the third measure (Amaj7#5).

Bassist Cecil McBee plays notes suggesting slightly different harmony when comparing the [A] sections of the head and the solos. In the first two measures of the head, Cecil plays Bb, A, F, and E in homophonic rhythm with the sax melody and piano chords. Later, in the solos for the same two measures of each [A] section, Cecil walks quarter-note-based bass lines thinking Bb, A, C, B, and a full measure of B. 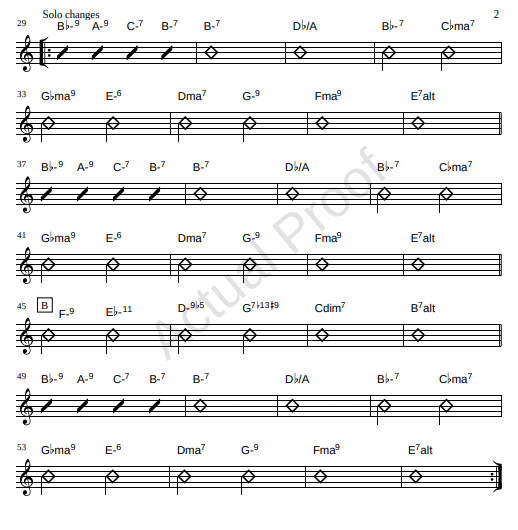 While Cecil approaches these two measures differently, Herbie does not. While he does not play exactly the same voicings in each instance, he plays similar enough ones to argue that Herbie continues to think the same sound even though Cecil plays a different note. It either sounds like four constant structure minor 9 chords, as in the solos, or like two minor 9 chords followed by two sus 9 chords in the head.

One counterargument to the A major analysis may be to hear the tune in A minor. E7alt strongly pulls to A-9 in m8-m9 and again in m28-m1 (albeit with an accented passing chord (Bb-11) on the downbeat). Those also occur at the terminus of one phrase and the beginning of the next. Later in m18-19 of the [B] section a minor ii-7b5 v7alt targets a C dim7. Chord qualities aside, that root motion would clearly indicate a temporary tonicization of C, the relative major of A minor.

To refute the A minor analysis, consider the extremely short duration of the A-9 at the beginning of the [A] sections, chord qualities that do not truly indicate a ii V I in the relative major, and most of all, the preeminence of C#'s (Db's) in the melody.

Regarding Wayne and Herbie's solos, they both favor quoting or referencing the melody from the head in the first two measures of each [A] section rather than playing phrases that flow through those measures. Wayne's third chorus particularly exemplifies this. First a short descending phrase spills into the third chorus (m57). The descending fourth of the main pitches as well as the abrupt ending of this phrase on beat two relate it to the head melody. Then Wayne leaves m65-66 completely empty while the rest of the band references the head melody. Last, Wayne directly quotes the head melody (m77) playing it one octave higher than it occurs in the head. 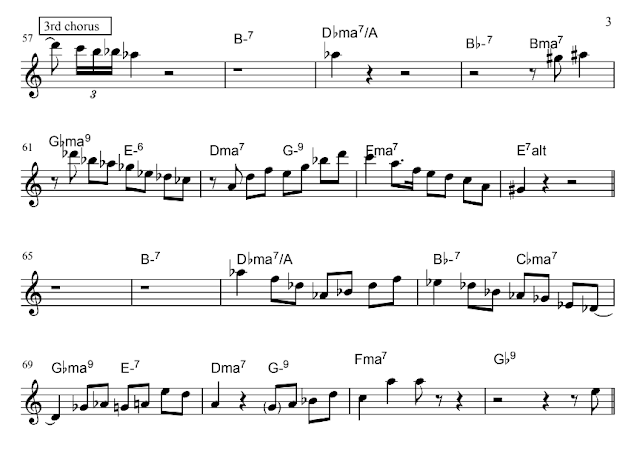 Those same two measures at the beginning of each [A] section interrupt the phrasing in Herbie's entire solo even more decisively. The only instance where Herbie plays an idea through them occurs at the beginning of his third chorus. While this example remains the best example of phrase variety it still connects to the main melodic/rhythmic motif from the head. Herbie leaves the first measure of his third chorus empty (m169) and in the next measure (m170) Herbie starts a phrase on the second eighth-note triplet in the first beat. This results in sounding like a rapid answer to the rhythmic motif of the head melody. Then Herbie continues this phrase for two measures and thus achieving some phrasing variety over this part of an [A] section.


Examining only Herbie's solo, a few instances stand out as suggestions for how he hears Wayne's tune. The first occurs during his opening chorus. Beginning in m116 and continuing into m119, Herbie plays a descending motif and repeats it three times with pitch variations and slight rhythmic adjustments. Starting halfway through m116, he plays C Ab Gb, all as quarter notes. Then in m117 he plays F# D A and then in m118 A F C (this time with F and C as eighth notes). Last, in m118, and starting on beat two rather than halfway through the measure, Herbie plays the last iteration of this motif with C A and E before allowing the whole idea to blend into a descending eighth-note triplet idea.


Comparatively simple in rhythm, these four motifs also spell out harmony in a concise manner. The notes in the second, third, and fourth motifs build D, F, and A- triads all in second inversion. D and F are both major 7 chords directly from the recurring harmony in the song and in a similar harmonic function, the notes of an A- triad fit over an Fmaj7 chord. The notes in the first motif (C Ab and Gb) do not form as strong of an intervallic shape as a triad but still reflect attention to the harmony on the downbeat of m117 (Gbmaj7).

The next eight measures of Herbie's first chorus represent a microcosm of techniques he uses in the remainder of his solo. First there's an angular idea that relates to the melody (m121-122). This idea also combines descending step-wise motion with perfect fourth and fifth intervallic leaps.


Second Herbie plays a two and a half measure scalar phrase based on eighth-note triplet ideas. Herbie plays groupings of six eighth note triplets where the second is tied to the third and the fourth is tied to the fifth. This rhythm alternates the duration of notes: short-long, long-short, short-long, long-short. Combining this rhythmic idea with scalar motion allows a wide variety of fundamental or coloring pitches to land on strong or weak beats. Herbie finishes the triplet idea in m126 with two beats of Dmaj7 material.

These three improvisation approaches - angular melodic shape that references the melody, scalar material (frequently with eighth-note triplet syncopated rhythms), and sixteenth-note based bebop shapes - constitute the majority of Herbie's solo. When this happens, Herbie employs either an idea that links to the melody of the tune (m141, m149, m177, and m189) or a specific motif (m153-156 and m179-m184).

The bridge of Herbie's second improvised chorus (m157-160) present a clear example of quality substitution. After concisely playing through the first four chord changes of the bridge (F-9, Eb-9, D-7b5, and G7) Herbie substitutes a Cmaj7 (m159) where the regular chord is a Cdim7. Sharing a common root, these two chords remain vastly different sounds since one possesses a major third and perfect fifth where the other lacks. Herbie's substitution pointedly contains three instances of the perfect fifth and two instances of the major third. He even plays both as an interval on the downbeat of the measure (with a D# grace note preceding) as if to leave no doubt as to the chord quality changing. A quick comparison of the bridge improvisation throughout the rest of the recording reveals this quality substitution as a clear choice. Herbie exploits a listener's expectation with this phrase.

Furthermore, this quality substitution corroborates the position of an overall A major tonality. C is the relative major of A minor. Analyzing the whole tune in the key of A minor would mean that the listener interprets the bridge in the middle of Herbie's second solo as helping establish the tonality. Simultaneously that same measure in the other two choruses of Herbie's solo, the previous four choruses of Wayne's solo, as well as the heads that bookend the tune all confound the tonality. C major in the bridge occurs once out of eleven total instances. Therefore a listener hears it as a quality substitution in relation to the overall key (A major) rather than as evidence of some other tonality.

Here is the full transcription of Wayne and Herbie's solos on "Toy Tune" presented in the same order as the recording. 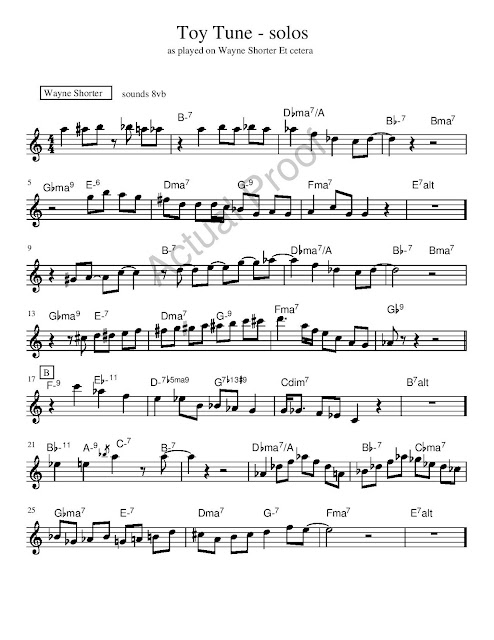 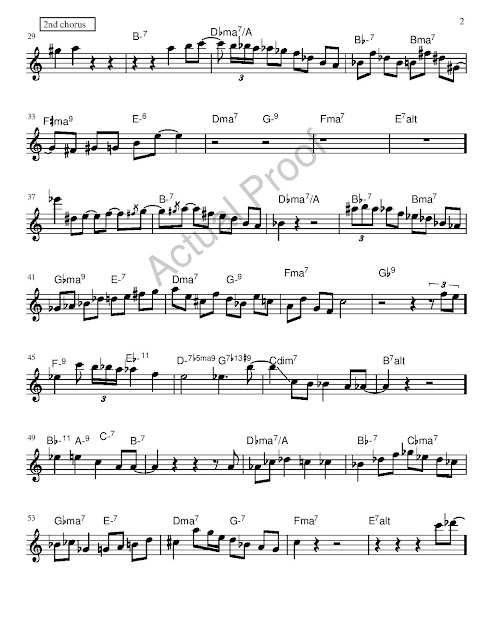 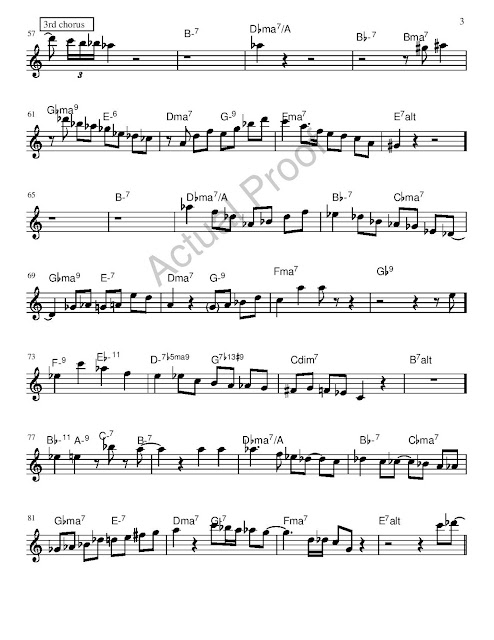 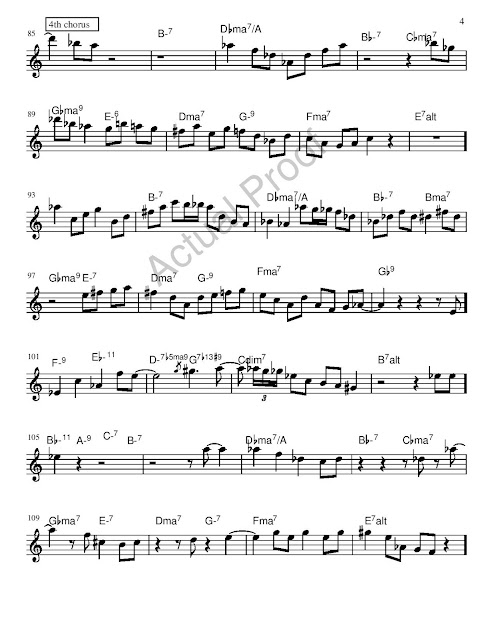 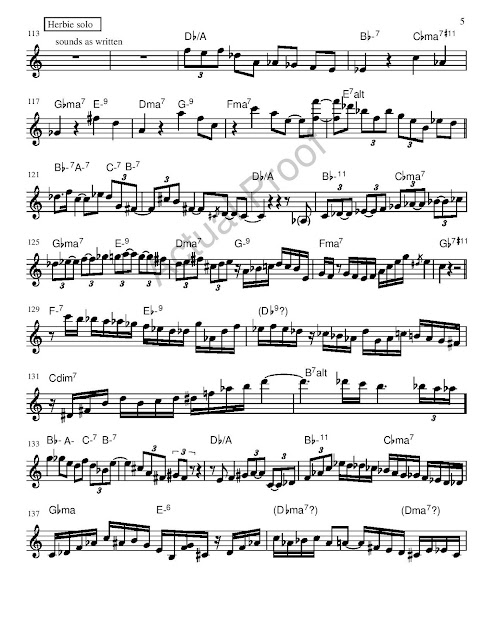 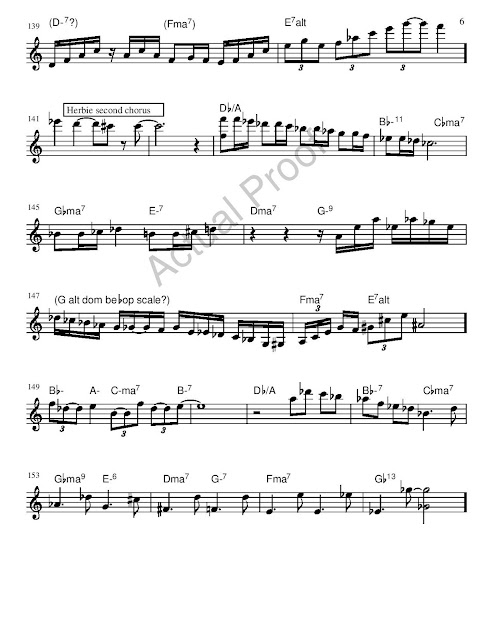 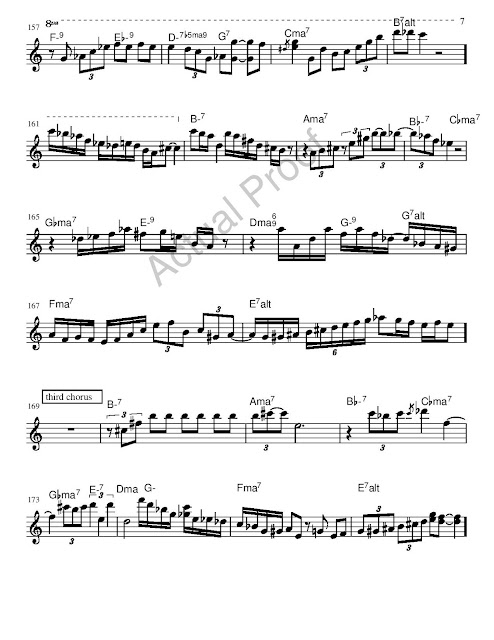 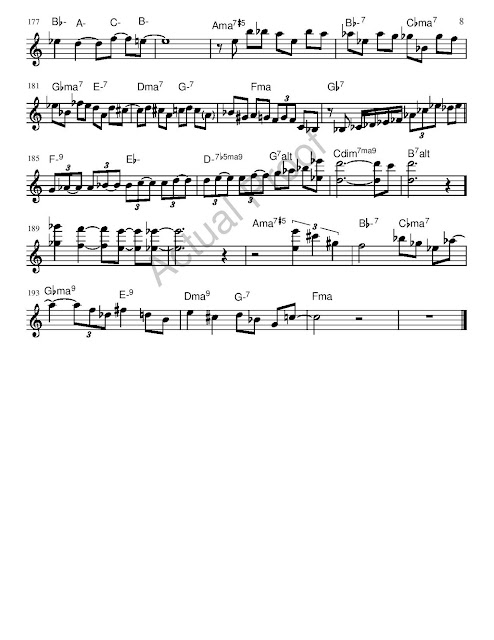